Heal it with a Laser? 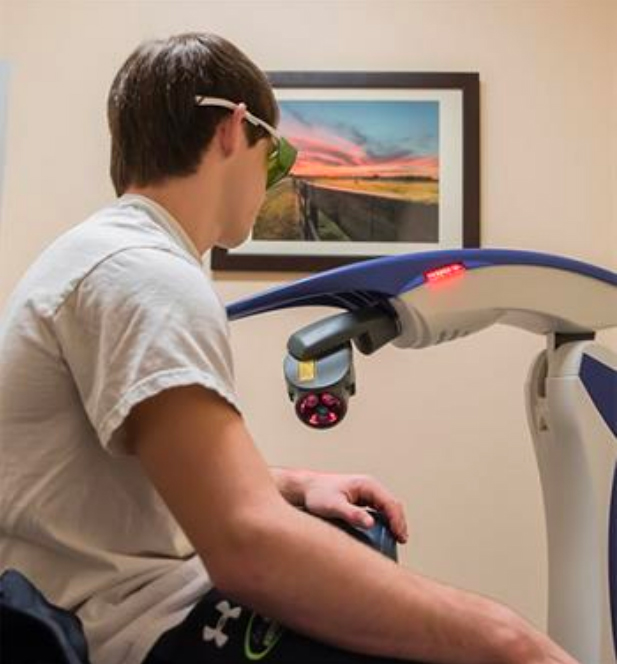 Imagine that you have a large cut on your arm. You go to the doctor for stitches, but instead of a needle and thread, she pulls out a flashlight sized instrument. She shines a narrow beam of red light along the cut and you watch the skin heal back together right before your eyes. It sounds like something right out of Star Trek doesn’t it? Well, the truth is that while we aren’t there yet, but we are a LOT closer than you think.

What I’m referring to is a relatively new treatment option for pain, inflammation, and tissue healing offered right here at Austin’s TexStar Chiropractic. It’s called Low-Level Laser Therapy or “Cold Laser”. The basic concept is that by focusing specific wavelengths of infrared light into a laser beam you can decrease pain and stimulate the regeneration of injured or damaged cells in your body. I’ll give you a little history of how this therapy developed and then some examples of how it is currently used in clinical practice.

In 1916 Albert Einstein proposed the theory of Light Amplification through Stimulated Emission of Radiation or LASER. It basically said that you could amplify the effects of light by focusing it into a tight beam. The first actual LASER producing device wasn’t invented until 1960 and by 1967 doctors were starting to use low powered lasers in medicine.

In 2002 the first therapeutic lasers for tissue healing received experimental FDA clearance after a test study was published showing good success in treating carpal tunnel syndrome in workers from a General Motors plant. The game-changer came in 2012 when a new type of laser received its patent and shortly thereafter it’s FDA clearance to treat muscle and joint pain, stiffness, spasm, and arthritic pain. This new class of laser combined the two most effective wavelengths and greatly increased the power used in the delivery of the laser beams which let doctors treat tissue much farther below the surface of the skin.

In the last five years, this has become one of my favorite tools in treating painful inflammatory conditions like arthritis and spinal disc herniations, as well as acute injuries like ligament and muscle tears. I have come to depend on this technology so much that when we opened our second TexStar Chiropractic location in Buda, the MLS Cold Laser was one of the first pieces of equipment that I purchased for it.

While medical lasers can’t heal injuries right before your eyes yet if the technology continues to advance as fast as it has, I don’t think we are too far off. There are doctors all over the city already that offer different types of cold laser therapy treatment options so if you have been dealing with a painful muscle or joint condition, a wound that is having trouble healing, or you’re just tired of taking pain medication for your arthritis and want to try something else this may be a great treatment option for you to look into.